Medieval castles became popular across Europe from 10th century onwards. From this period until the end of the medieval era, castles evolved significantly and so did their overall structures and defences.

The most vital military problem faced by a medieval castle was the possibility of facing a siege. If a siege was laid to the castle, it had to be appropriately equipped and defended in order to ward off the attacking force. In doing so, a number of weapons were used by the defenders of the castle.

It was then used to fire directly at enemy lines. The catapult was frequently aimed at destroying the siege towers and other siege engines of the attacking force. It was also used to throw large rocks on enemy formations in order to disrupt enemy lines which was sometime complemented with a quick sally from castle gates by the castle’s garrison.

However, a catapult could offer limited damage to the enemy forces because of its limited range and the fact that it was a cumbersome weapon to be used by castle defenders. On the other hand, when used to attack castle walls from the outside, a catapult was highly effective. 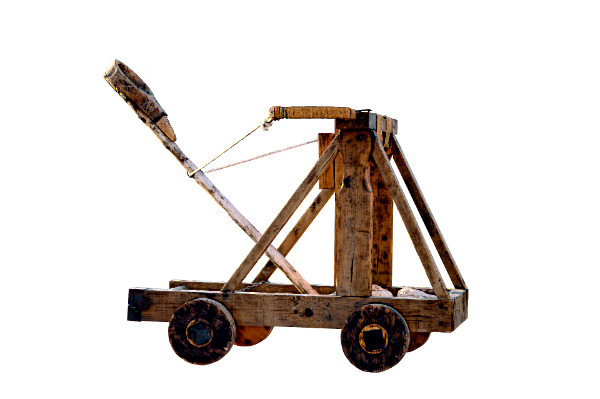 A more rudimentary type of weapon was simply rocks or stones. In desperate situations especially when a castle didn’t have a large enough garrison but enough household members, people inside the castle would simply pick up huge rocks and stones and start launching them from castle walls.

When defending a medieval castle, the defenders on castle walls made use of their high position by launching missiles into enemy lines. A crossbow was a highly effective weapon in this regard. Different types of crossbows were used throughout different phases of the medieval era.

The Crossbow became especially popular with castle defenders because it allowed them to wreak havoc on enemy lines from a distance. A good crossbow, when wielded by an expert archer, could shoot as far as 400 yards. This meant that good archers on a castle’s walls could effectively withstand an army far larger than their number.

Towards the mid phase of the medieval period, castle walls typically included small slits made specifically for crossbow archers to launch their arrows and missiles into an approaching enemy. In some cases, crossbows were also used to launch flaming arrows into enemy lines. Such lit arrows were typically used to torch the siege engines or any other wooden siege weapons carried by the enemy armies.