The Byzantine Empire lasted 1125 years and one of its most important contributions to the modern world is its architecture.

Domed churches and other places of worship prevalent in the Byzantine period are still widespread but not many people are aware of their origins.

In a nutshell, Byzantine architecture was an improvised version of its predecessor’ styles and building techniques but with a more religious dimension.

Byzantine architecture picked up where Roman architecture left off. Artists and architects of this era adopted a style that was heavily influenced by Christian beliefs.

Biblical teachings and principles were depicted through various media including paintings and a few sculptures that were made to decorate the interior of synagogues and sacred structures.

Although bound by a stiff tradition, uniformity and anonymity, many critics regard Byzantine architecture as sophisticated, geometrically complex and well ahead of its time.

The geometric proportions of Byzantine buildings were more complex than their predecessors.

The Romans primarily used stones to decorate public structures but bricks and plaster were added in the succeeding era.

A number of Byzantine buildings that survived the wear and tear of time used to be places of worship. 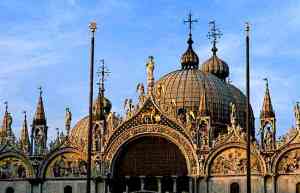 The earliest examples of Byzantine architecture were put in place during Justinian I time in power.

Most of them can be found in Istanbul, Ravenna, and Sofia. The development of a system that made use of triangular segments called pendentives to efficiently transform a church’s square plan into a circular dome was considered a breakthrough and greatly contributed to Western architecture.

Roman architecture served as a guidepost for Byzantine architecture. The Basilica of St. John of the Studion, built in the 5th century and considered the oldest surviving church in Constantinople, is proof of the empire’s dependence on established Roman styles.

The Church of St. Sophia in Sofia, Bulgaria was built during the 6th century A.D and is an example of early Byzantine architecture.

Like many structures of this period, the church is made of bricks and concrete.

Justinian’s architects adopted the same method of construction that the Romans once used. They invested in bricks, mortar and concrete in order to build various structures.

The Byzantines improvised on the longitudinal basilica, a type of architecture that prevailed during Constantine’s reign.

While long, narrow basilicas remained popular in the West, the East Byzantine Empire started building centralized structures distinguished by domes and a round interior.

The differences between the Western and Eastern way of building can be associated with their respective renditions of the cross. Western crosses are long and narrow while Eastern crosses are wide.

Aside from The Church of St. Sophia in Sofia, Bulgaria, other surviving testimonies to early Byzantine architecture include the longitudinal Basilica of Sant’ Apollinare Nuovo and the centralized church of San Vitale which Emperor Justinian ordered to be constructed but never saw.

Meanwhile, the iconic domed churches of Hagia Sophia and Hagia Irene in Constantinople are home to the emperor’s monuments. The two churches were said to be modelled after the little church of Saints Sergius and Bacchus, known for its combined longitudinal and centralized features.

The Great Palace of Constantinople, which used to be the residence of Eastern Roman emperors, is one of the most popular non-religious Byzantine structures along with the classical columns of Ba-silica Cistern and the nearly two hundred towers on the walls of Constantinople.

The remarkably long Sangarius Bridge (also known as the Justinian Bridge) with a length of 430 meters and the arched Karamagara Bridge whose single pointed arch spans 17 meters are Byzantine structures subjected to great engineering. 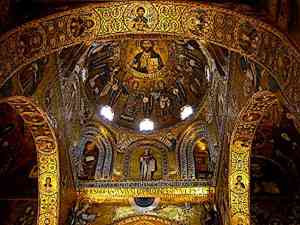 Theotokos of the Pharos, a church built during Basil I’s reign, and Nea Ekklesia were believed to have started the cross-in-square plan that many sanctuaries and sacred places in Italy and Greece adopted during the 9th and 10th centuries. Cattolica di Stilo and the monasteries of Hosios Lukas, Daphni and Nea Moni of Cios may have based their structural plans on the now non-existent churches.

Christianized Slavic countries were also partial to the cross-in-square type and many of the Christian sanctuaries in Macedonia and Kiev were archetypical cross-in-square models with a twist.

The churches sported several minor domes held in place by drums. The domes grew taller and narrower over time.

Rome’s downfall paved the way for Byzantine art and architecture. Following the Visigoth invasion which divided the empire into two regions, the Western division retained its capital in Rome while the Eastern side installed a new capital in Byzantium (later renamed Constantinople after Roman emperor Constantine and the setting of modern-day Istanbul).

When Emperor Justinian I succeeded Constantine from 527 to 565 and declared Christianity as Byzantium’s official religion, an architectural style that mirrored the sentiments of the time began flourish.

Although the Byzantine state reached its artistic and literary pinnacle during the Macedonian dynasty from 867 to 1056, there was little development in the architectural side.

The Macedonian dynasty’s best application of Byzantine architecture was the Hosios Loukas monastery in Greece which dates back to the 11th century.

Religion was the be-all and end-all of Byzantine art and architecture. Justinian built a series of churches throughout his empire in an attempt to actualize Constantine’s vision of a strong and unified Christian church.

The central-plan church of Hagia Sophia (the Church of Holy Wisdom) took only five years to construct under Justinian’s behest and was the era’s most remarkable achievement.

The structure has impressed architects and engineers across time because of its innovative design and the fact that it has continued to exist at present despite a brief construction period. 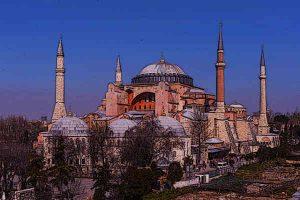 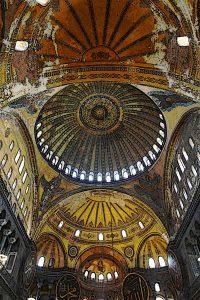 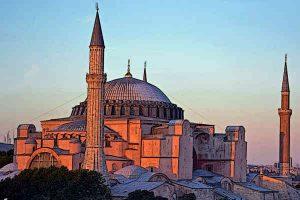