The Medieval mace was a popular weapon in medieval times, it was mainly used by the cavalry and was probably an infantry weapon initially. The medieval mace weapon was a fearsome looking weapon, the most common design incorporated a long handle usually made from metal or wood with some type of metal spiked ball at the end, however there were many different mace weapon designs which usually involved small changes to the head such as flanged, knobbed or spiked mace heads. Unlike medieval flails maces did not have any chain at the end of the shaft connected to the spiked ball. Often the Medieval mace would have a spike sticking out of the end of the head. The morning Star was also a weapon that could be described as being a Medieval mace.

What were medieval mace weapons made from?

Medieval maces usually had long handles that were sometimes made of wood or more commonly metal, mace weapons could be made of bronze, iron or steel, but the most common metal used to make a medieval mace weapon was probably bronze. If a mace weapon was to be used for any ceremonial purposes it could even be made from gold or silver. 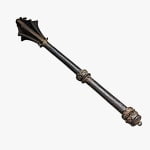 What type of weapon was Medieval mace

The Medieval mace was a close combat weapon that was classed as being a clubbing and bruising type of weapon, it was not designed to cut skin and draw blood, this meant that the medieval mace could be used by churchmen or clerics who were not allowed to draw blood in combat in medieval times. The later medieval mace heads looked similar to the design of a dart flight. Medieval maces were light weapons and they had a security chain at the bottom of the handle for the soldiers wrist to stop the weapon being lost in close combat fighting situations.

Medieval Maces were often used in ceremonies by clerics, lawyers and royalty, it was also a weapon that was commonly associated with the medieval knight, used in medieval tournaments in melee and joust contests.

During the medieval period mace weapons were being upgraded along with other medieval weapons and during the Gothic period the Gothic mace was introduced, it had a thicker shaft in the grip area and a guard and pommel was added that was similar to what you would find on a medieval sword handle. 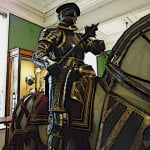 History of the Medieval mace weapon

Medieval maces were believed to have been used in the 10th century and they are depicted as a weapon used by the Normans in the Bayeux tapestry, maces are also shown in the maciejowski Bible of the 13th century and it is known that the Nomads and Turks used medieval mace weapons in combat that had animal head designs.