Vikings Warriors – Why were Viking Warriors so Scary?

Vikings were warriors, invaders and explorers who lived from the 8th to 11th century in Scandinavia.

Viking Warriors earned their living through agriculture, trading and fishing.

During the Viking Age, they raided and traded across the wide areas of Europe, Vinland and Greenland.

The Vikings warriors had strong navigational and sailing skills so they extended their explorations to North Africa, Middle East and other Mediterranean regions.

They were known for the raiding, exploring and trading expeditions with the people of new countries. 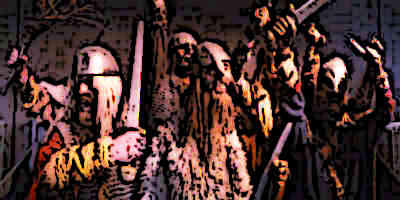 The Viking Age was the period when Vikings expanded throughout Europe. They explored Europe through seas for trade, raids and conquest.

Vikings were seen by many historians as brutal raiders. They became popular for their first raids in many parts of Europe, Ireland and specially England.

In the period from 793 Ad to the late 11th century, they started their raids from the Christian lands of England and expanded to the parts of present day Russia.

Their raids were brutal, bloody and quick. They looted churches and monasteries during their raids and took sacred saint relics. Along with looting treasures, Vikings also enslaved thousands of people in these raids.

Berserkers were a special group of Viking warriors who fought battles without any traditional armor. The Norse word was Berserkr which means someone who wears a coat made out of a bear’s skin.

The Berserkers wore special clothing like fur of a wolf or bear to distinguish them from other warriors.

Berserkers were devoted to the bear cult which is the religious practice of worshipping the bears found in many North Eurasian ethnic regions. They were fierce warriors and created havoc in the enemy.

They howled like wild beasts and were described as being invincible.

They were often portrayed as bodyguards and elite soldiers. They are described as “mad like dogs" and “strong as bear". 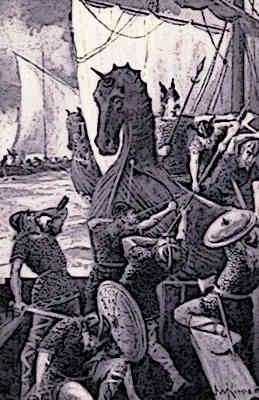 There are various myths on the appearances of the Vikings. Vikings were very keen about their cleanliness.

They had well groomed hair and beards. Both men and women had neat hairstyles and clothing which showed their wealth and status.

However, Christian writers who wrote in the 9th and 10th centuries often portrayed them with horned helmets and other barbaric elements which instilled a fear of them in the Europe.

The Viking raids started in the year 793 AD when Vikings targeted the monastery in the Northern England.

The monasteries were the place with rich amount of treasures and valuables so they were more vulnerable to attack.

Vikings were not Christians so they had no problem raiding the churches, looting them, and captives could be sold as slaves.

However, such disregard of religious and holy sites earned them a reputation of being barbarians.

This also played a role in trumping up a fear of the Vikings among the Europeans.

We hope you enjoyed this article on Viking Warriors, please check out our other Viking warrior articles – links at the bottom of the page!