Warwick Castle was built In the year 1068 by William the Conqueror in medieval times, the name came from the town’s name in which it was built, that being the town of Warwick in Warwickshire. Warwick castle is situated on the bend of the Avon River, due to it being a strategic location.

In 1068 when William the Conqueror invaded England he built Warwick castle in the form of a motte & bailey design and for a century the castle kept its original design. In the 12th century medieval period the castle was re-built in stone due to bigger threats from attackers and their advanced machinery. Since then Warwick Castle has kept its original design and in the 14th century it got re-fortified according to the architecture of those times in order to serve its required purpose as a stronghold.

“William the conqueror had many reasons to fear his people, both the ones he conquered and the ones that served him at that time and he needed to be well protected”.

Where is Warwick castle

As the name suggests, Warwick Castle is situated in the town of Warwick on a strategically planned location at the bend of the River Avon. The location is perfect for defense of the castle due to the river that runs on the east side, although the river over time has eroded the rock on which the castle stands you can still see the excellent defences that the cliff and the river must have provided in medieval times.

William the conqueror had big plans for this castle and its location only strengthened its purpose which was to safeguard the Midlands against rebellion and attack as he continued to advance northward during medieval times. 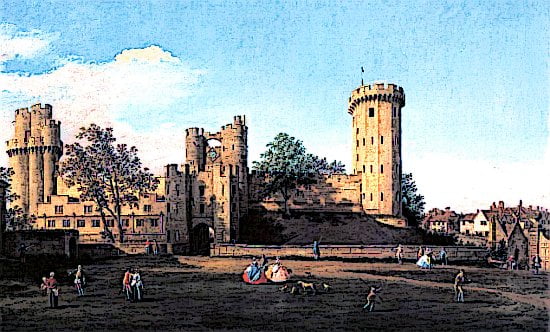 View of medieval Warwick castle at the front East

Within Warwick castle he founded the first Church or All Saints by the year 1119. In 1153 the wife of Roger de Beaumont who was the second Earl of Warwick, was tricked into surrendering control of the castle to the invading army of Henry of Anjou.

Warwick castle became a prison and for a time it held that notorious title. Even the English king Edward IV was put in warwick Castles prison in the 15th century. The control of the castle and its lands was always associated and passed down in the Beaumont family until the year 1242 when Thomas de Beaumont passed down the castle and its lands to his sister Lady Margery.

The castle had different owners and different Earls which held the castle and its defenses with reasonable care. The most significant change was done to the castles defenses in 1330-1360 by Thomas de Beauchamp by adding a gatehouse, barbican and adding two towers called Caesar’s and Guy’s tower.

In the year 1449 the family line of the Earl of Beauchamp ended when Anne de Beauchamp died. Richard Neville became the next person to take control over Warwick castle and he became the Earl of Warwick. After his death in 1471 the castle passed down to his son in law George Plantagenet, who was later executed in 1478, which then made Edward Plantagenet the earl, who was 2 years old, making it impossible for him to rule so The Crown took over the ownership.

During the Crowns care from 1478 to 1547 the castle went under massive renovations that cost 500 loads of stone. In 1590 Dudley died and until 1604 the castle was only a name, with no ruler. King James I gave the castle to Greville who then became the Earl of Warwick.

In the 17th century the grounds were turned into a garden due to the decline in use of castles at that time and the fortifications were enhanced due to an impending war while the rest was furbished to provide a better living environment.

In 1618 Warwick Castle created a 3rd title earl and this time the title was given to the Greville family. Robert Greville enhanced the defences of the castle in 1642 in order to prepare for the First English Civil War. On the 7th of August a siege was laid on the castle, which was lifted on the 23rd. The Royalists were forced to retreat because the garrison army got relieved by the forces of Robert Devereux.

From 1642 until 1660 Warwick castle was used as a prison and garrison, up until the point when the English Council of State ordered the castle to disband its garrison and hand over control to Robert Greville. The castle flourished and was improved a lot during the ownership of different earls and in 1747, the Italian Painter Antonio Canaletto was ordered to paint the castle by the Greville family. Gothic design was introduced to the wooden bridge over the Avon in 1758 and new rooms, porches and stairways were introduced between 1763 and 1788.

One of the largest catapults in the world is preserved and is sitting on display at Warwick Castle. The trebuchet is fully functional and in June 2005 it made Warwick castle its home. The siege engine stands 18 meters tall, has over 300 pieces of oak and weighs around 22 tons. The design is fully functional and it takes 8 men half an hour to load, wind up the mechanism and fire it. Since 2006 the trebuchet has held the record for strongest catapult of its type by launching a 13 kilogram projectile over a distance of 249 meters at a speed of 260 kilometers per hour.

This castle, as much notorious as it was famous was visited by many important people during its growth. Queen Victoria visited the castle in 1858. Arthur Mee visited the castle in 1936 and was astounded of the splendor that surrounded him. In the year 1978, after being 374 years under the Greville Family, the castle was sold and made a tourist attraction.

In 2001 Warwick castle was named as one of Britain’s Top 10 historic houses and monuments. The castle holds and protects important heritage, the famous Warwick Trebuchet and it holds many plays within its walls which are open to the public and receive more than half a million visitors each year.