The Great Schism of 1378, also known as the Great Western Schism, was a dispute between three Popes over the authority of the Church. The 1378 Schism continued from 1378 to 1417 when the dispute was finally resolved and the Church became united once again. Unlike the previous Great Schism between Eastern and Western Churches, the Great Schism of 1378 was mainly political in nature and was ended by the Council of Constance.

History of the 1378 Great Schism

The history of the Great Schism of 1378 started with the return of Papacy to Rome in 1377 and the ascension of Gregory XI as pope. Pope Gregory XI died in 1378 and the cardinals elected Urban VI as the new pope. Urban VI had a violent temper which offended many cardinals who removed themselves from Rome to Anagni and elected Robert of Geneva as Pope Clement VII. At Avignon, a third pope, Benedict XIII, was elected which complicated the situation further. 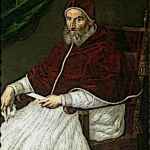 The Great Schism of 1378 can be defined as more of a political rather than theological dispute. Other than three main claimants, various papal courts emerged at Rome, including those of Boniface IX in 1389, Innocent VII in 1404, and Gregory XII in 1406. The emergence of multiple claimants complicated the administrative and judicial situation of the Church and resulted in widespread spiritual anxiety among the people.

Causes of the great schism

The first and foremost cause of 1378 Schism was the violent temper and reformist attitude of Gregory XI who was elected the pope in 1377. Another reason of the Schism of 1378 was that the ascendancy of Gregory XI to papacy was seen as growing influence of the French which made many cardinals and other people uncomfortable. 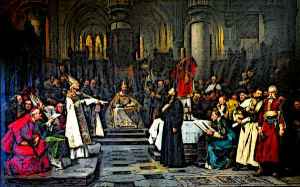 Effects of the great schism

The Schism of 1378 had its short term effects but did not have any major consequences in the longer term. In the short term, it split the Church into various factions with multiple popes claiming their authority. While the issue was resolved in 1414 with the election of Pope Martin V, the Kingdom of Avignon refused to recognise him as the new pope. But this did not impact the authority of Pope Martin V and the 1378 Schism had all but ended by 1429 when the authority of Martin V was accepted by all parties.

1378 Schism was one of those points in the history of Church when there was a danger of disintegration of the Church. This was because the Cardinals themselves were divided on the choice of the pope. The conflict that was initially a dispute within the Church soon became a diplomatic crisis that engulfed all of Europe, with secular leaders choosing sides with either Rome or Avignon.

Conclusion of the 1378 Schism

The Great Schism of 1378 was a political dispute within the Roman Catholic Church that saw the authority of the pope split between various factions. The 1378 Schism started with the ascendancy of Gregory XI to papacy whose attitude gave rise to discontent in the cardinals. Thus various other leaders claimed their spiritual authority over the church. The 1378 Schism, however, was resolved after the Council of Constance when Martin V was finally chosen as the only Pope.

We hope that you found this article on the great schism of 1378 factual and informative, if you’d like to learn more about medieval religion and the great schism of 1054 please look at the links at the bottom of this page or look at other religious articles within the medieval life section of this website. 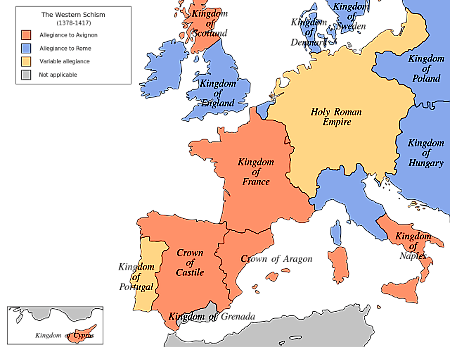