The Tudor era in England marked the subduing of the traditional nobility by an absolute monarch and the rising influence of the merchant class.

This resulted in a larger part of society becoming wealthier and attaining the ability and status to wear expensive and well-made clothes.

Consequently, like other aspects of culture in England during the Tudor era, clothing evolved rapidly and came to reflect the influences of Continental Europe mixed with the original styles of England.

It was during this period that the embellishments and external ornamentation of clothing reached its peak, especially in the clothes worn by the Tudor monarchs. 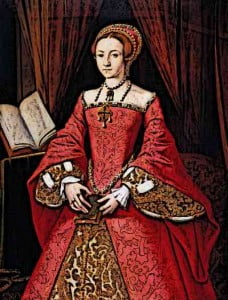 The clothing of the Tudor monarchs was considered the most fashionable in all of Europe at the time.

Notable in this regard was Tudor King Henry VIII who was unusually tall and handsome. Henry spent a vast fortune on his wardrobe each year and wore a rich variety of doublets, shoes and codpieces as his regular clothing.

Henry also regularly used expensive furs and dresses ornamented with jewels. An expensive, gilded dagger was a regular part of the King’s dress.

Elizabeth I, the last Tudor monarch, was similarly known as one of the fashionable monarchs of the time, having being the very person who introduced leg-of-mutton sleeves in Europe at the time by wearing them herself. She owned more than 3000 headpieces and gowns, and was known for dressing very elaborately.

The clothing of men during the Tudor era typically comprised of a short doublet which usually reached the thighs. Under the doublet, hose was worn to cover the legs while a uniquely designed coat was worn on top of the doublet. This coat was very wide in the shoulders and carried slashed sleeves which was a fashionable style at the time, especially made popular by Henry VIII.

Hats were a common part of the male dressing of the period and often came decorated with feathers. The overall outlook of the dress was such that it appeared like a vaguely square-shaped dress. Towards the later Tudor era, men’s clothing evolved so that a short and smarter jacket was now worn on top of the doublet and hose. Ruffs also became popular with men in this period.

During the early Tudor era, women wore a dress which comprised of a tight-fitting corset which was fashionably used to show off a very smart waist line. Below the corset, the dress comprised of kirtle and a gown over it, both of which were extravagantly full at the bottom.

This gave the outlook of women’s dress look like a triangle. A coif with attached cornet served as the headgear of the women. Towards the later Tudor era, women’s dress changed significantly and women began wearing a large bodice and a circular frame called farthingale on top of which a skirt was worn. A large ruff embellished with rich lacework was worn around the neck.