Anglo-Saxons were the people who once inhabited and ruled the areas which are present-day England and Wales. They were Germanic people who lived in these regions from the 5th century to the time of the 1066 Norman Conquest. They

Anglo-Saxons were from the three clans of Angles, Jutes, and Saxon. English society and culture has its roots in the Anglo-Saxon culture.

The Anglo-Saxon language is called ‘Old English‘ because many words of English are derived from it. The systems developed by Anglo-Saxons became the basis of modern English systems. The legal system is one of these examples. 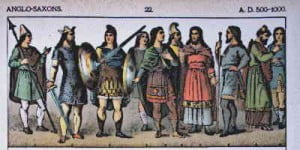 The works of Old English include sermons, epic poetry, legal works, hagiography, chronicles mainly including Anglo-Saxons Chronicles, riddles, legal works, and others. 400 extant manuscripts found from that period are written in the Roman alphabet and Anglo-Saxon runes.

All the literature was written at that time but due to efforts of Alfred, the works were saved and translated in Old English. The leather was mostly used to write on and sewn in to books.

The ink came from oak galls. Unlike rhyme, the Anglo-Saxons poetry organized around alliteration. There are three major strands of their literature: epic poetry, religious poetry, and riddles.

Christian missionaries brought manuscripts to Anglo-Saxon lands from the Mediterranean to assist them in the establishment of the early Anglo-Saxon church. St Augustine’s Gospels are one of the books that came to England at that time from Italy.

The books from other countries laid the foundation of text, script, and decoration in Anglo-Saxon England and formed part of the Anglo Saxon culture.

Anglo-Saxons then produced their own books. The Bible also came as a model to Anglo-Saxon land and was a very important part of Anglo Saxon culture. A magnificent 11th-century gospel was then produced at Winchester. King Alfred also contributed to write or assist manuscripts.

Anglo-Saxon or Old English was the language of present-day England and areas of Scotland. Anglo-Saxon is a West Germanic language which is closely related to Old Saxon and Old Frisian.

The grammar of Old English is also related to Classical Latin. Some of the features of Old English were pronouns, finite verbs, adjectives, and nouns. The main difference from Latin is that verbs have no synthetic passive voice and can be conjugated in only two tenses.

It is believed by many linguists that Anglo-Saxon people received influence from local languages, especially Common Brittonic. Many grammatical changes observed in English were due to the influence of Brittonic.

The time of Anglo-Saxons from the 5th century to Norman Conquest (1066) was the time of wars and battles. Anglo-Saxons fought with each other and with others during this period. It was a custom to bury males with weapons. The armies were mustered for both offense and defense.

It is said that the training of a soldier started in his childhood through warfare games. There are no significant references to military training and strategy. King Alfred made a defensive strategy by building fortified buildings.

The Role of Religion in Anglo Saxon Culture

The early religious history of the 5th and 6th centuries was mainly dominated by ‘pagan’ religious beliefs. The early society of Anglo-Saxons was much attached to the horse. Horses were associated with the gods.

Horses played a major role in funerary practices and other rituals. Anglo-Saxons worshiped in temples, sacred wells, hills or trees. Later, Christianity found its way into Anglo-Saxons territory from Rome through monks and monasticism.

In the beginning, it was not very well accepted by Anglo-Saxons. Then slowly Christianity grew in England and churches were established. The Roman tradition of monasticism was adopted in the region.

The kingship fueled freedom, societal advantage, and relationship opportunities for the elite of the Anglo-Saxon society. This helped the Anglo-Saxon language and culture to prosper.

Ties were typically forged with a person, not a cause. The power of a kingdom lied in the strength of the leader-king. There was no concept of underlying administration.

God and King were joined in the peoples’ minds with the help of the church. King Alfred is one of the greatest kings of Anglo-Saxon history. He made many reforms in the military. In his reign, Anglo-Saxon culture, language, and literature flourished.

There were two main classes in Anglo-Saxons society i.e. slaves and free men. Both classes had a hierarchical structure. There were many groups of free men and many types of slaves.

The important ranks among freemen were the king, the nobleman or thegn, and the ordinary freeman or ceorl. The system was based on the value of their wergild or ‘man price.’

Women enjoyed considerable independence. They were ‘oath worthy’ and a married woman could own property. There were big penalties for sexual and other offenses against them. A bride-price was paid to the relatives of the bride and a morning gift was given by the bridegroom.

Anglo Saxon dwellings and settlements evolved significantly over time. During the early period, Anglo Saxons mostly lived in huts constructed from wood. Straw was used as the main material for the thatched roofs on these huts.

These huts ranged from small to very large, the largest housing entire halls and typically belonging to the chief.

The settlements were also marked by unique features. There were a series of buildings called Anglo-Saxon royal villa in which the king was accommodated during his visits to his land to give justice and collect rents.

People came to the king to have their disputes settled, lands granted, policy debated, appointments made, and to trade.

The early Anglo-Saxon buildings were simple. They were built by using timber and thatched roofing. Anglo-Saxons constructed small towns near rivers sites used for ports and near centers of agriculture.

There was a significant diversity in the sizes of the buildings, though most were square or rectangular. A sunken floor with a shallow pit over which plank floor was suspended could be seen in many houses. Stone was used in constructing the churches. The first church in the Anglo-Saxon region was built in Kent in 597.