Battle of Courtrai 1302 – ‘Battle of the Golden Spurs’

Battle of Courtrai 1302 also known as the ‘Battle of the Golden Spurs’ was a battle fought by the Kingdom of France in a bid to reassert its control over the County of Flanders. The war came about when the population of Flanders revolted against French control and killed many Frenchmen stationed in Flanders.

King Philip IV of France responded by gathering an army and attempting to put down the revolt. The outcome of the battle is considered one of the most expected in medieval ages, one which was to alter the nature of medieval warfare permanently. 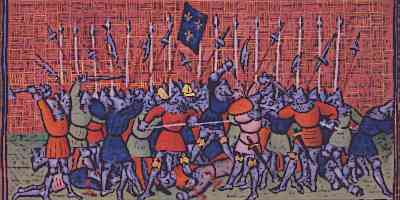 Prelude to the Battle of Courtrai 1302

France had been at odds with the County of Flanders since the last years of the 13th century. This conflict continued into the 14th century as Philip IV held the Count of Flanders as hostage and placed his own governor to rule the region.

The governor led a garrison to the city of Bruges in Flanders but the rebels attacked and killed the Frenchmen in May 1302.This was the incident that led Philip IV to organize a large and powerful army comprising of a vast number of noblemen and dispatch it to deal with the revolt in Flanders.

The Battle of Courtrai

The Flemish side of the battlefield comprised of a large infantry of 9000 men and 400 noblemen. The Flemish infantry was equipped with pikes and goedendag, weapons which enabled them to deal with the cavalry effectively.

The French army comprised of 2500 mounted noblemen who formed the core of this traditionally formed army. The total number of the French reached 8000.

Although in traditional terms, the French army was superior given the vast numbers of its cavalry, the Battle of Courtrai was to prove otherwise. The terrain on which the battle was fought was marshy and dotted with ditches.

So while the first advance of the French infantry was somewhat effective, they were soon called in to be replaced by the cavalry charge of the noblemen.

This charge was faced by the Flemish infantry firmly and they consequently routed the French cavalry. This resulted in the large-scale defeat of the French army with hundreds of noblemen being put to death by the pursuing Flemish forces.

Aftermath of Battle of Courtrai

According to medieval estimates, the French lost nearly 1000 noblemen at the battle making it one of the most disastrous defeats for the French nobility. Among the dead noblemen were some of the most notable French aristocrats.

The defeat of the French army effectively left the Flemish territory completely independent for the next two years until it was again engaged in a conflict with France.

As a result, medieval European kingdoms began to supply themselves with larger infantry forces meant to play a more decisive role in the battlefield. In subsequent centuries, even noblemen were to fight on foot during many conflicts.