The word Bard was used chiefly to signify a Celtic musician or poet. Although several equivalent words were used to denote musicians and poets in other cultures as well. Medieval bards have greatly influenced the history, music and culture of the Celts and were chiefly responsible for the rise of secular music in the middle ages.

Bard is a word derived from the Celtic words Gaelic baird or Cymric bardh. It was after the Renaissance period that the word ‘bard’ was adopted. In the 16th century, a bard represented great and serious poets comparable to the likes of William Shakespeare. In Lowland Scotland however, the word bard was used to describe a class of beggars and wanderers.

Medieval Bards were primarily professional singers and musicians. Some of them were also poets who were descendants of the ancient Celtic people. They mainly composed verses and poems in honour of the Kings and soldiers’ heroic accomplishments during the medieval era.

Medieval Bards were considered to be of a distinct class and were given hereditary privileges, especially during the middle ages. According to historians, there were three different types of medieval bard. The first sang songs of praises and victories, the second one sang about the laws of the nation, while the third kind of medieval bard sang about family histories as well as poetic genealogies. 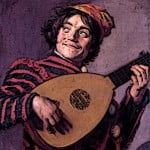 In medieval Gaelic and British culture, a bard was a professional poet/story teller, employed by a patron, such as a monarch or nobleman

Daily Life of a Medieval Bard

Medieval bards maintained high esteem throughout Ireland and Wales. Throughout the middle ages, kings and chieftains acquired services from medieval bards and bestowed gifts to them in exchange of their services. On some occasions, monasteries also maintained bards to serve them as genealogists and historians as early medieval literature was not yet written down.

Medieval Bards were generally considered as repository of stories, songs, poetry of the people, legends and songs. They were honoured and often awarded certain diplomatic freedoms. During the middle ages, Medieval bards travelled from place to place to bringing news from the king’s court. Because of their education and oral tradition, and because it was very expensive to acquire the services of scribes, most medieval bards were commonly relied upon. Bards were considered the only reliable source of information at this time.

There were two classes of medieval bards: the bard Teulu who was part of the king’s official household, and the pencerdd who were the heads of the bardic fraternity in the area. During the 12th and 13th century, having bards as part of the king’s household were no longer practised, thus greatly affecting their position in society especially after the end of native rule.

Medieval Bard – The Society of Bards

Medieval bards were categorized into various grades. Some of them were even required to undergo lengthy apprenticeships where they acquired various skills, before they could serve professionally. Medieval Bards eventually were recognised highly. They formed a society that had hereditary rights and privileges such as tax exemptions and were not required to render military services. They were treated with utmost respect. Their special duties included celebrating victories of the people, singing hymns of praises, giving religious and poetic expressions as well as the national sentiments of the people. Medieval bards were very influential during the medieval era because of these rights and privileges.

Medieval bards were sources for encouragement for the people especially in facing hardships during the Dark Ages. However, their encouragement was later regarded as rebellious and degenerate. As a result, several laws were enacted against them. The society of Medieval bards was first regulated by the laws formulated by Hywell Dha in Wales, which was revised by Gruffydd ap Conan later on. The laws represented them as immoral and a proclamation known as the Commission of the Caerwys Eisteddfod complained of ‘vargraunt and idle persons naming theim selfes mynstrelles Rithmers and Barthes’. In some Celtic areas, the term bard carried a derogatory meaning. Nonetheless, house bards still continued in other Celtic countries until the 19th century.

Since bards were no longer appointed by kings to their household, some nobilities became troubadours and trouveres. In fact, some princes from Wales had become bards during the 12th and 13th century. Most of the really poetic trouveres and troubadours were influenced by the 14th century Welsh bards.

Here are some of the most famous Medieval Bards:

Medieval Bards – Replaced by the Troubadours and Minstrels

Since medieval bards were regulated and subjected to various laws, they were eventually replaced by Troubadours and Minstrels who became famous during the middle ages. Minstrels were mostly servants whose services were obtained primarily as travelling musicians. They performed songs that told stories about distant places, historical events and imaginary events. Most minstrels created their own stories and tales, and they often memorized and embellished the works of other musicians or poets.

Meanwhile, troubadours were medieval composers who performed old Occitan lyric poetry between 11th and mid-13th century. The word troubadour was derived from trobador, a 12th-century Occitan word. Troubadours performed epic poetry called chanson de geste, which dealt with stories of chivalry and courtly love. Troubadours also travelled to various countries, including distant and far lands during the time of the Crusades.

If there was anything in common among bards, minstrels and troubadours, it was their shared fondness toward retelling stories of courtly love and chivalry. Most of these stories and tales were transferred to book form and conveyed in the romantic adventures of King Arthur. Because of this, love, chivalry and the Arthurian Legends became an essential part of medieval literature.

Medieval bards were basically Celtic musicians. However, the term can also be used to refer to epic singers of non-Celtic origin. These are the aoidoi of the Homerics and other bards from the Eastern and Western parts of Asia. Primarily, bards sung narratives, poems telling the tales of great heroes from the past. Some of these epic singers were also poets, composers and instrumentalists. The multi-faceted nature of bards can be traced back to ancient Celtic cultures. Today, singers, musicians, poets and even story-tellers can be considered modern day bards. These are the people who perform to capture the audience’s imagination, creating the illusion of magic and eloquent grandeur.