The Byzantine Empire existed from the 5th until the 15th century. For most of this period, the Empire had the most formidable military in whole of Europe which was highly organised, exceptionally well-armed and divided along different units. The exact armour and weapons to be used by the soldiers in each Byzantine unit were well-defined in Byzantine manuals.

Like other accessories, shields were also specified for soldiers of different units with the aim of serving them best at the battlefield. The design and development of shields in the Byzantine Empire accepted influences from a variety of sources. The basic shield design that Byzantine Empire used in early centuries was mostly derived directly from the shield design of the Roman soldier. In time, the Empire seems to have borrowed shield designs from the Western Empire as well as from the Asia Minor.

The most common type of shield used by the Byzantine soldiers towards the 11th and 12th centuries was the kite shield. The kite shield originally evolved from a kind of Byzantine shield which was triangular in shape and long enough to guard the legs of the soldier.

One of the most notable variations of the kite shield was an almond-shaped shield which had a slightly raised top and which was fairly popular in Byzantine Empire during the 11th century. Although large in size, the kite shield wasn’t too heavy and could be carried by a soldier on his back when not using the shield. 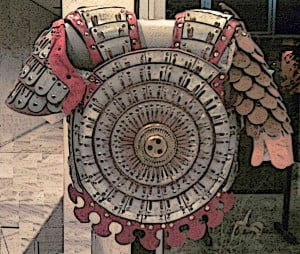 Round shields called skoutaria’s were among the most popular types of shields used by Byzantine soldiers. This type of shield was typically light-weight and was carried by Byzantine cavalrymen on the battlefield. The shape of such shields was typically domed or in some cases, conical. The average diameter of the round shields was 90 cm. There is significant evidence that Byzantine infantrymen also used such light-weight and round-shaped shields in their battles in the Balkans.

Most of the shields used by the Byzantine soldiers were made from comparatively light-weight materials such as wood. However, there are some historic mentions of iron shields being used by Byzantine soldiers during naval combat. This was typically necessitated by the danger of fire in naval conflicts where iron shields would have served soldiers far better.

Even so, shields made from iron were significantly heavier than their wooden counterparts. This probably dictated the construction of smaller iron shields which would be used only occasionally during naval conflicts.

The basic material used in the construction of most Byzantine shields was wood. Other materials such as a wide variety of leathers and metal pieces were frequently used to reinforce this basic structure. The larger kite shield was made almost entirely from wood since using any other materials would have rendered it too heavy for practical combat use.

Hardened leather was used to make the kite shield stronger without incurring too much additional weight. The round shield was also made mostly from wood with iron boss used in the design. Byzantine soldiers may have used metal strips to strengthen their round shields which typically didn’t weigh much and would have been practical for use even with significant metal reinforcements.