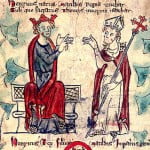 King Henry II other names were Henry FitzEmpress, Henry Curtmantle and Henry Plantagenet. He was called Henry FitzEmpress because he was the son of the Empress. His mother was Empress Matilda, who was the daughter of King Henry I of England, whereas his father was the Geoffrey, Count of Anjou. He was also known as Henry Curtmantle because he liked to wear short hunting style jackets instead of long robes.

King Henry II was an active and a merciless ruler. He wanted to restore the lands and privileges of his Royal Grand Father King Henry I. His rule was very harsh as he frequently intervened with the Norman nobility through the misuse of his power as a duke or through his influence over their lands there as a king. This medieval king introduced the new class of royal administrators by promoting “new men”, minor nobles with independent wealth and lands.

King Henry II was famous for his energy and drive. In the early years of his life he spent this energy in hunting and other adventurous activities. In the later years he spent more energy in administrative affairs and judicial reforms. He was also infamous for many incorrect reasons. He used to have a piercing stare. He had sudden bursts of harsh temper and sometimes he refused to speak at all. These things sometimes were effective and brought positive results. 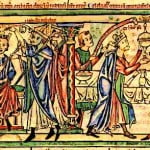 King Henry II in 1162, appointed Thomas Becket as the Archbishop of Canterbury. Becket was Henry’s old friend and English Chancellor. King Henry II believed that by appointing him as the Archbishop, Becket would be politically weakened in the Church and would rely on Henry’s support, but it did not happen and Becket changed his lifestyle and came forward as the staunch protector of the church rights. He also disconnected his links with the King. The difference arose on many issues, but the main source of conflict was Henry’s argument that the King could enforce justice over the clergy that committed secular crimes, whereas Becket was of the view that they could be tried only in Church courts. Both were stubborn and no one was willing to back down from his stance. Many efforts were made, but to no avail and the controversy ended with the death of Becket on 29 December 1170.

Ireland was ruled by the number of local Kings in the mid 1260s. Their authority was very limited as compared to the European Medieval Kings. King Henry II invaded Ireland in 1171. Henry’s timing of the invasion was influenced by many factors. He was encouraged by Pope Alexander, who thought it was an opportunity to establish Papal authority over the Irish Church. Another factor was King Henry’s fear that his nobles in the Welsh Marches would acquire their own territories and they would be beyond the reach of his authority. Henry’s invasion of Ireland was successful as both the Irish and Anglo Normans accepted his rule. 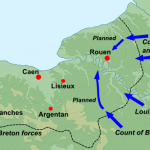 In 1173, Henry’s eldest sons and rebellious barons with the support of France, Scotland and Flanders revolted against the King Henry II. There were several grievances among the young princes which weren’t being addressed properly by the King. Their mother, Eleanor also supported them. King Henry II defeated the revolt through vigorous military action by his talented and loyal military commanders known as the “new men”. The Great Revolt lasted for eighteen months and resulted in the demolition of at least twenty castles on the order of the King and death of many people. In the end, the rebels reconciled to rule of King Henry II.

King Henry II married Eleanor of Aquitaine in 1152. She was the daughter of William X, Duke of Aquitaine and Aenor de Chatellerault. Together they had eight children, five sons and three daughters. The sons were William IX; the count of Poitiers, the Young Henry, Richard I of England, Geoffrey II; the Duke of Brittany and John of England. The daughters were Matilda, Eleanor and Joan. This Medieval King also had a lot of illegitimate children, but the most prominent of these were Geoffrey; the Arch Bishop of York and William; Earl of Salisbury.

King Henry II was suffering from a bleeding ulcer that was a fatal disease. The news of John publicly siding with Richard in the conflict proved to be the last shock for Henry and he collapsed into a severe fever which ultimately proved fatal. Henry died on 6th July 1189 at Chinon Castle in France. The King wished to be buried at the Grandmont Abbey in the Limousin but the hot weather wouldn’t allow the transportation of his body and he was instead buried at the Fontevraud Abbey.

King Henry II was the first Medieval Plantagenet king and was known as the Henry FitzEmpress i.e. the son of the empress. He was very energetic and ambitious and wanted to regain the lands of his Royal Grandfather. His own children revolted against him and he didn’t take concrete step to resolve the issue of succession after him. Richard I succeed King Henry II after his death.