Who was the First King of England?

Alfred, also known as King Alfred the Great, ruled Wessex from 871 to 886.

Alfred the Great became the first king of united England and ruled as King of Anglo-Saxons from 886 to 889.

He was the son of King Aethelwulf of Wessex.

Alfred fought several battles with the Vikings and defeated them in 878 in the Battle of Edington.

King Alfred was the one who encouraged education in Anglo-Saxon rather than Latin.

His legal and other reforms were aimed to increase the quality of life of his people. He also improved the structure of the army.

He was a Christian by religion and promoted Christianity. 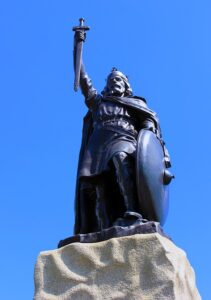 After the death of Alfred’s father, King Aethelwulf, his brother became the ruler.

He was the successor of his brother Aethelred in 865.

The family expected him not to be a warrior king because he gave much of his time to books.

He suffered from Crohn’s disease throughout his life.

After getting the crown in 871, he had to face the threat of Viking attacks. He made peace with the Vikings on terms that they would leave Wessex.

The Vikings left but started raids again. The battle of Edington in 878 was a crucial battle of King Alfred in which he defeated Vikings. This paved his path to becoming the first Anglo-Saxon king of united England.

Alfred the Great – Conflict with the Vikings

There was a conflict of King Alfred with Vikings throughout his reign.

Even after defeating Vikings at the Battle of Edington, he struggled with Vikings.

The threat from the Vikings was a major reason for the formation of the navy of Anglo-Saxons.

Alfred built a great navy. A small sea battle was fought between Vikings and Alfred in 881 “on the high sea" against 4 Danish ships.

Two ships were destroyed completely, and the other two surrendered.

The small-scale combats with the free Viking raiders continued for decades. King Alfred was always successful in protecting Wessex from Vikings throughout his life.

Danelaw was a treaty signed between King Alfred and the Viking warlord Guthrum after the Viking defeat at the Battle of Edington in 878.

Danelaw led to the peace between Anglo-Saxons and Vikings. King Alfred and Guthrum defined the boundaries of their kingdoms in 886 when Danelaw was formalized.

Fifteen shires were roughly included in the Danelaw. Danelaw brought peace in the region, which improved economic position of the area. 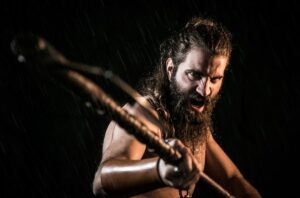 Alfred the Great – First King of England Reputation in History

King Alfred the Great holds a respectable place in British history not only due to his victory over Vikings but for his extraordinary reforms.

Burhs, the strategy points, were established throughout the kingdom. Alfred restructured the army, which led to many victories.

He made a good system of taxes based on the landholding of the tenant.

He also formed a navy with a small fleet in 896.

He also promoted the Anglo-Saxon in comparison to Latin. This had an immense influence on Anglo-Saxon culture and art.