During medieval times, fighting with a sword was one of the most common ways of warfare and this resulted in a lot of importance for medieval shields.

A wide range of medieval shields were prevalent during different eras of the medieval times, including buckler shields, heater shields, parma shields, targa shields, mantlet shields, and others. There were various parts of a medieval shield such as boss, bouche, and enarmes.

The history of shields can be traced back to Greeks in the ancient times when a circular shield called hoplon was used. These shields were mainly made of bronze and wood and were used as far back as 7th century BC.

Romans made innovations to the Greek shields and used a rectangular shield known as Roman Scutum, it consisted of three layers of wooden strips with different orientations for strength.

During the medieval times, a variety of shields of different types were used during different eras. Medieval shield parts were also quite diverse although most of them had three main parts in common which are discussed below. 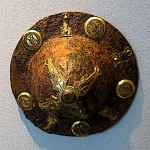 The most important among all the parts of medieval shields was the Boss. It was the round central part of a shield and was therefore the most crucial with respect to defences. Special attention was paid in making this part stronger in order to deflect the heavy bows of enemy swords and other weapons. Among the parts of medieval shields, the boss part was generally made of wood or thick metal and was sometimes also known as the Umbo.

Two other important medieval shield parts were called Bouche and Enarmes. Bouche was the name given to a notch cut at the top of the medieval shield. This cut was used to rest a lance in while jousting. Enarmes, on the other hand, was the name given to the straps inside a shield for providing solid grip on the shield. Previously, a single bar behind the boss was used to grip the shield and thus the enarmes was an improvement over previous shields. 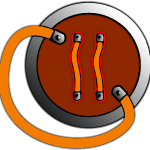