Learn about the Flail Weapon used in the medieval period *Discover how the one handed Military Flail and Two Handed Great Flail Weapons were used in Combat!

both weapons had different origins. 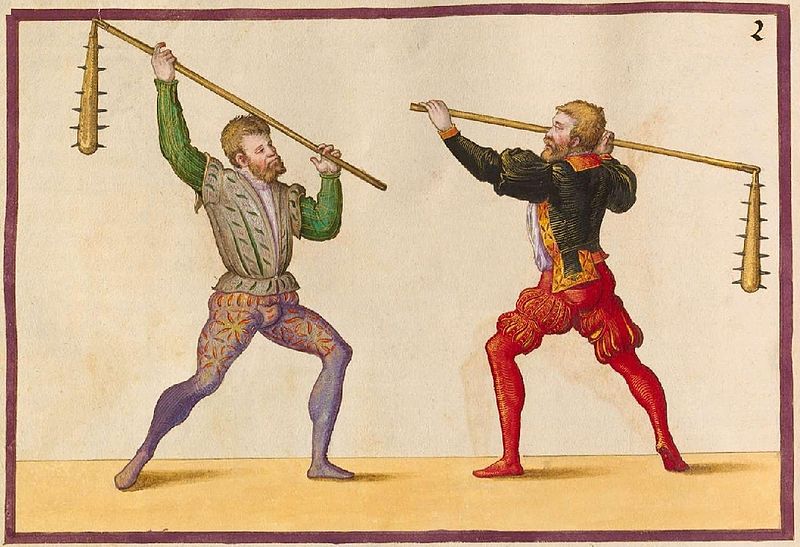 The one-handed military flail weapon was specifically designed as a combat weapon and was not used for any other purpose.

One-handed flail weapons had short handles 1-3 feet that were made from wood, a staple attached to a chain, attached to a spiked weight at the end of the chains that were usually lumps of metal that would cause great impact damage, the most recognizable would be the spiked metal balls that you would associate with Medieval knights.

Safety chains and ropes were also added to these military flail weapons as they were easily lost in battle and this stopped them from flying off at the wrong moment.

There are different variations of the one-handed flail such as the morning Star and Mace which is a Swiss weapon and had a longer handle than the standard flails and long chains, at the end of the chains was a large heavy spiked metal ball designed to cause maximum impact damage.

Most Medieval flails were designed towards the end of the medieval period in the high medieval times *they were also several variations that were introduced in the 16th century.

All the different types of one-handed flails that had been designed in medieval times were similar, the only real difference was the length of handles and chains and the piece of metal used for the head at the end which was usually some type of spiked ball.

Some Flails could have two chains with two heavy spiked balls at the end for double the impact, however, these were very heavy, hard to control, and would leave you feeling exhausted quickly.

Defending against a Flail weapon

Make no mistake a Flail weapon was a terrifying weapon to face, you needed total concentration as you had to watch the enemy and the circling ball of the flail weapon at the same time, one lapse in concentration and you were as dead as a Dodo, the only real options you had were to avoid it, deflect it with your shield or try to get underneath it, however, it was a very difficult medieval weapon to defend against.

Advantages of the flail weapon

The flail weapon was a fairly lightweight weapon that could be maneuvered quickly, a medieval soldier could get a lot of force into a strike using a Medieval flail weapon the lump of metal at the end which was usually a ball and spikes caused a lot of impact damage on the human body.

Also, the medieval flail weapon could wrap around enemy Shields and hit its target, so the flail could sometimes get past defenses other weapons were unable to do.

Disadvantages of the flail weapon

For all its advantages the flail weapon was not a popular Medieval weapon used by knights, there were many other weapons more popular than the medieval flail. The flail had a lot of disadvantages, for example, you were unable to direct a flail as efficiently as a sword and on many occasions, the flail did not land where the attacker wanted it to.

Flails weapons were poor defensive weapons generally as you had to keep them circling at a high speed, as soon as the speed dropped for a second you were in trouble, they also left you exhausted which left you vulnerable.

Wielding a flail weapon use a lot of energy and the speed of the attack could be slower than with other weapons. This allowed the enemy to protect themselves from attacks with a Flail weapon more easily than other weapons and many knights were able to use a shield effectively against a flail attack.

The medieval flail did have some advantages and was commonly used by peasant soldiers as they were easily available. Even though the one-handed flail was a dedicated Medieval weapon they were not popular and there were other weapons such as swords that had many advantages over them such as accuracy and energy used in their use. Medieval flails were fearsome-looking weapons they mainly used by Knights and foot soldiers but they will not go down in history as one of the better weapons used in medieval battles.