The Warwolf was a siege engine used by English armies during the Scottish Wars of Independence. It was built on the orders of king Edward in 1304 as he laid siege to the Stirling Castle in Scotland.

The Warwolf is notable for the fact that it was the largest trebuchet ever built. In contemporary terms, it was the most formidable siege engine and virtually no castle wall could withstand stones that rained down on it from the Warwolf siege engine.

Due to its sheer size, the Warwolf was also an effective weapon from a much greater distance than regular siege engines. Despite being a medieval record-holder in terms of size, very few mentions of the Warwolf trebuchet exist in medieval literature.

The few extant mentions of the Warwolf trebuchet from the medieval times cast light on its sheer size. According to such sources, Edward ordered five master carpenters and 49 other labourers to work on the trebuchet.

These workers continued constructing the Warwolf for 3 months, making it the largest known trebuchet. Other medieval sources mention that when the trebuchet was disassembled, its pieces had to be carried in 30 wagons.

According to modern estimates, the trebuchet would have risen to a height of 300 to 400 feet. It could effectively raid stones at a wall 200 yards away, hurled at a speed of 120 miles per hour. 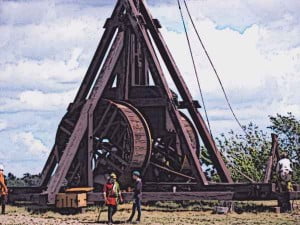 The Warwolf was a siege engine used by English armies during the Scottish Wars of Independence.

In 1304, King Edward of England laid siege to the Stirling Castle as part of the English response to Scottish Wars of Independence. At this time, the English had up to 13 siege engines with them.

However, the Scots holding the castle refused to surrender. Edward then ordered the construction of the trebuchet and the work on it commenced within sight of the castle walls.

Witnessing the construction of such a mammoth trebuchet, the Scots tried to surrender to Edward but Edward sent back a part of the Scottish garrison into the castle so that he could still test his trebuchet’s prowess.

When used against the Stirling castle, the trebuchet destroyed the gatehouse and was as formidable in its use as its size. Given its size, it could toss stones of up to 300 pounds in weight which, when thrown against the Stirling Castle, effectively demolished the parts of the curtain wall where they hit.

According to them, Edward ordered the payment of 10 shillings to the workers and the overall construction of the trebuchet itself cost upwards of 40 pounds.