The Battle of Stelai was a part of the naval confrontations that took place between the Aghlabid emirate of Ifriqiya and the Byzantine Empire.

The Aghlabid emirate already had control of vast territories along North Africa as well as the island of Sicily and aimed to disrupt Byzantine control along the shores of Western Greece.

Confronting Aghlabid naval might was crucial to Byzantine plans of reasserting its control over southern Italian territories as well as to secure the Greek coast.

The Battle of Stelai took place around 880 and was a major victory for the Byzantine Empire, paving the path for the Empire to reassert its control in southern Italy.

In 880, the emirate of Ifriqiya launched a fleet to attack Greek coasts. This was an attempt by the emirate to expand its naval influence eastwards, threatening the Byzantine naval might.

The Byzantine Empire sent a fleet of 60 ships to confront the Ifriqiyan fleet.

The Imperial Byzantine fleet sailed under Nasar who was one of the most accomplished Byzantine military leaders of the time.

Later historians placed the size of Nasar’s fleet at 140 ships. The Aghlabid fleet sailed under the command of Rabah who was the Aghlabid governor of Sicily. 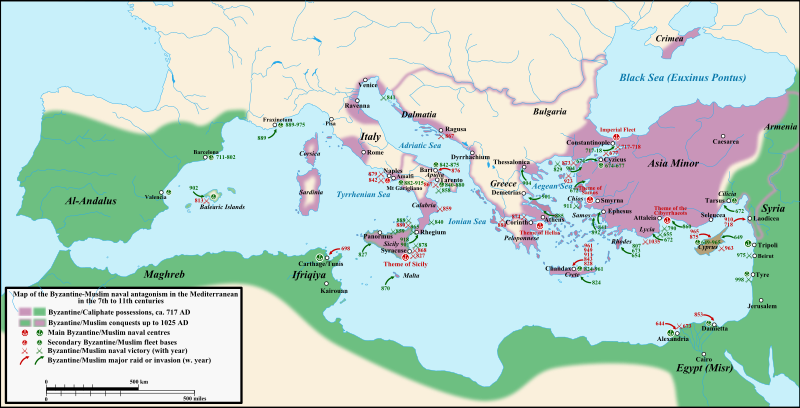 Historical accounts relate few details of the actual fighting involved in the battle. According to the available historical resources, the battle was a fierce confrontation between the Byzantine and Aghlabid fleets, ultimately resulting in a victory for the Byzantine Empire.

Most of the Aghlabid ships were captured by the victors. The Aghlabid defeat further put the Aghlabid rule of Sicily into jeopardy as naval strength was crucial to the emirate’s control of the island.

Location of the Battle

The location of the Battle of Stelai has been a point of contention throughout history. One of the historical sources cited the location of the battle as Mylas which may be related to modern-day Milazzo in Sicily.

Other sources state that the battle took place near the island called ‘Stelai’, which could be the place known as Punta Stilo today in Calabria. Another theory states that the term ‘Stelai’ is derived from the Greek work ‘stylos’ which means ‘column’. A stylos, standing near Rhegion, may have lent the name to the battle.

Aftermath of the Battle

The decisive victory of the Byzantine fleet at the Battle of Stelai paved the path for the Empire to regain lost territories in southern Italy.

Nasar, with the Imperial fleet under him, directly raided Sicily which was under the control of Sicily.

He further assisted the Byzantine army which had reached southern Italy on a military campaign. Having gained naval supremacy around the Italian coast, the Byzantines were also able to send another naval fleet to fight the Arabs near Naples.

In the ensuing confrontations, the Byzantines stood victorious and Arab standing around southern Italy further eroded. Ultimately, the victory at the Battle of Stelai contributed significantly in restoring Byzantine rule over southern Italy and in stemming the rise of Arab power in the region.

Learn More about the Battle of Stelai at Wikipedia