The Battle of Crécy in 1346 was one of the most important battles during the Hundred Years’ War between France and England.

It was also the first major victory of the English against the French during the initial years of the Hundred Years’ War. The English army was led by King Edward III while Philip VI led the French troops. The Battle of Crécy was fought during the Edwardian era of the Hundred Years’ War. The battle itself was fought on 26 August 1346 near Crécy which is a place in Northern France. 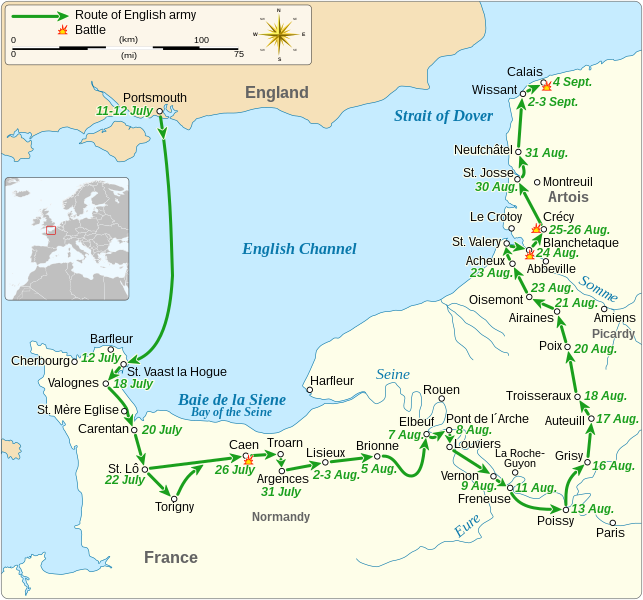 The history of the dispute arose when the throne of France was passed to Philip VI instead of Edward III even though the latter was the closest relative of the deceased French king, Charles IV.

This issue, coupled with subsequent developments, culminated in the Battle of Agincourt. The issue of the French throne started in 1328 when Charles IV died. While Edward III reluctantly accepted the ascension of Philip VI, the people of Aquitaine preferred the English throne which strained their relations with France.

The land in Aquitaine was confiscated by Philip VI in 1337, further damaging the relations between England and France. The navies of both countries clashed and the skirmishes eventually culminated in the Battle of Crécy in 1346. An interesting fact about the Battle of Crécy is that the Holy Roman Empire was on the side of England while the Kingdom of Majorca fought alongside the French. The Battle of Crécy was one of the first major battles where the main focus was on infantry instead of heavily armored knights in previous battles.

Just like other major battles during the Hundred Years’ War, the English made heavy use of their longbowmen which proved to be one of their decisive advantages.

Infantry Foot Soldiers *Longbowmen in the Battle of Crécy

This battle was actually one of the very first major battles to make successful use of longbows and made the English army realize how effective huge numbers of longbowmen in tightly packed groups could be in battle. The English army consisted of the English and the Welsh troops along with Breton and German mercenaries. It comprised over 5,000 longbowmen and it was this part of the army that played a central role in the victory of the English.

The Battle of Crécy would go down as one of the most important battles during the Hundred Years’ War between England and France. Various nobles took part in the Crécy battle from both sides.

The battle established England as a major military power and ushered in a new era of warfare where archers were very important infantry.

Battle of Crécy in Summary This battle started a new era of warfare where main attention was paid to the infantry particularly longbowmen archers instead of armored knights. The battle resulted in the victory of England over France and the Edwardian phase of the Hundred Years’ War concluded with a famous and memorable victory for England. We hope you enjoyed this article on the Battle of Crécy in 1346 and the 100 years of war in the middle ages!