Romanesque Art was one of the first innovative and coherent styles to spread across the whole of the catholic world.

It was greatly influenced especially by the Byzantine art that was practiced in the 13th century. The term was coined in the 19th century by historians who had continuously studied this unique style of art and architecture.

The European countries that have practiced Romanesque art include Italy, southern France, and Spain.

The main purpose for the development of Romanesque art was to preserve the iconic biblical events that took place and to chronicle important figures, such as influential leaders of those medieval times. Generations of the Catholic people have been educated by these Romanesque arts and have learned about the events painted.

These Romanesque decorations were commonly created in churches and include

Scenes from the Life of Christ

There are two periods that saw the growth of this art, the Carolingian and Ottoman periods. The Carolingian period dates back roughly 120 years from around the year 780 to 900. The era during the reign of Charlemagne and his heirs was commonly referred to as the Carolingian Renaissance. Romanesque art was produced under imperial patronage which belonged to the monasteries.

People from this group showed quality workmanship and sophistication of design in their Romanesque art. They used a variety of materials which included metal, enamels, and ivories. The period is important to the Romanesque period, basically because it is in this era whereby the artist borrowed the concepts of representing the human figure in art form.

Ottonian periods date back to 932 during the reign of the first three Holy Roman Emperors of the Ottonian Dynasty. The period is mainly associated with most of the illuminated manuscripts that were very brightly colored.

Romanesque art dates back to approximately c. 1000 until the rise of the Gothic art style. The art was widely used by Early Catholic Christians who saw the importance of depicting the scenes of the bible and human figures in the form of statues. The art is said to have developed from the two periods, namely the Carolingian and Ottonian periods. Many concepts used in this art were borrowed from the two predecessor periods. This includes materials used, art carving mode, and even patronage.

The period after the Romanesque Style Painting in bright colors period is the Gothic style that came into being in the 13th Century.

Gothic architecture is the most developed and well elaborative compared to the others. The improvement is due to the experience and the fact that the combination of ideas from the previous periods was brought together. The primary media of the times were illuminated manuscripts, sculpture, panel painting, stained glass, and Fresco.

Romanesque Art is characterized by its beautiful style in both painting and sculpture. It is well represented in the iconic models such as Christ in majesty, scenes from the life of Christ, and the Last Judgement. The illuminated Romanesque manuscripts show lavish-colored decorations of the period. Romanesque art can be seen in the bible and Psalters of the time.

The colored décor was also in capital columns that were exciting and showed great prowess and mastery of the design. The art was completed with scenes of several carved figures. At the start of the period was the use of a large wooden crucifix which is a German innovation. A good example of the use of this art is the statue of the enthroned Madonna which is one of the best statues showing the sculptural mode of the period.

Compositions had a shallow depth and were flexible so that the historical initials could be squeezed into shapes. The church tympanums and columns capital was created in this manner.

The artists of the period were greatly known and appreciated by society. The iconography was arrived at after a thorough meeting by the leaders and the patrons of the time. It took years of experience for the kings and leaders of the time to award an artist a contract to depict a scene in the Romanesque style.

One of the most famous artists of the Romanesque period is Nicholas of Verdun (1130-1205). He was a French artist who is famous for his expertise in goldsmiths and enamel carving. Artists with great experience carried out mosaic-style art. He created figurines, shrines, and candlesticks decorated with precious stones (Myers and cobblestone) 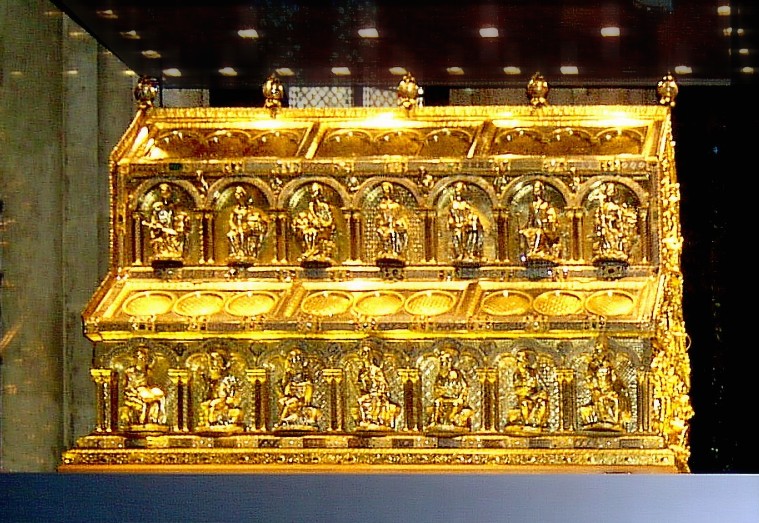 Master Hugo’s works span from 1136 to after 1148. He is famous for illuminating the Bury Bible and making bronze doors. It is believed that the bronze doors for the western entry of the Abbey church, the great bell, and the carved crucifix with the figures of Mary and Saint John are part of his works. Finally, he created the ivory of Cloisters cross which presently resides at Cloisters in New York.

Another famous artist is Gislebertus who was active in the 12th century. He was a French artist who had great expertise in sculpting. Some of his great works and decorations include the Cathedral of Saint Lazare in Autun, France.

Most Romanesque artworks by famous artists exist today and are scattered all over Europe and the USA. The most valuable ones are kept in museums for safekeeping and to be studied by historians. The icons include the Carving from Maria Laach Abbey, in the Eifel, Rhineland, scenes found on capitals depicting the creation and fall of man. The other episodes in the Old Testament such as Jonah and the whale, and Daniel in the lion’s den are also part of this iconic art.

The theme of the three kings is well known in Romanesque art. The cloisters of the Santo Domingo de Silos Abbey are found in Northern Spain. The doors and walls of catholic churches also portray the icons as seen in the Angouleme Cathedral in France and Catalonia and Lastly, the pictorial schemes in the door of the church of Santa Maria at Ripoll.

Historians from far and wide have appreciated the works of the creators of Romanesque art. The continued work of study and finishing the incomplete icons is a good objective for preserving and maintaining the icons. Generations to generations will be able to learn the art and appreciate the expertise of their ancestors.