Architecture in the early medieval period flourished in various styles across different parts of Europe. Stow Minster Church Lincolnshire dates back to 1040 and features some of the tallest arches used in Anglo Saxon architecture.

In the Byzantine Empire, architecture during this period embellished Roman heritage with Oriental influences and Christian themes. Similar unique architectural developments continued in different parts of Europe through High and Late Middle Ages. One common element, though, was that nearly all early and most High medieval architecture buildings were ecclesiastical while towards the end of the medieval period, many secular buildings started to be the hallmark of contemporary European architecture. The palace complex occupies a huge place and includes residential quarters, fortifications around the boundaries, sizable courtyards and fountains in the interior, lavishly embellished carvings, and arabesques all over the walls and window panels, and the extensive use of the iconic Moorish muqarnas. Most of the original architecture and decorations of Alhambra are intact to this day. The Cologne Cathedral in Germany is one of the most iconic examples of Gothic architecture of medieval Europe. Construction of the Cathedral began in 1248 and continued until the 15th century but it was ultimately completed only in the 19th century. Cologne Cathedral in Cologne, Germany. Its first phase of construction was from 1248 to 1473. Construction was then halted and resumed only in the 19th century.

The Cathedral is noted for its huge exceptionally tall spires, closely following the defining Gothic architectural features. Architectural marvels of the Cathedral include the use of flying buttresses, very high Gothic vaults, and highly intricate decorations and carvings on the entrances and interior of the cathedral. The Cathedral also remains one of the most important pieces of Christian architecture today and is a popular site of pilgrimage. The Tower of London is a defining example of Norman architecture in England. The original construction of the Tower of London dates back to 1066, the same year when Normans under William the Conqueror took over the control of England from the Anglo-Saxons. The Tower of London was constructed as a means of consolidating Norman rule in London and surrounding areas. The architecture of the Tower reveals the Norman style of constructing very strong and awe-inspiring towers and fortifications which, at the time of the construction, served to subdue the local population in the face of Norman invasion. The most iconic feature of the Tower is the “White Tower” which was long used as a Norman prison from 1100 onwards. Most of the original architecture of the Tower of London is intact today. The Notre Dame de Paris in France is yet another iconic example of Gothic architecture and one of the most recognizable architectural wonders of medieval France. The construction of the Cathedral began in the 12th century and the building was completed only in the 14th century. The Cathedral is known for being among the earliest buildings successfully employing huge flying buttresses, a key architectural feature that was to become a defining part of High Gothic architecture in time.

The interior of the building includes some of the most beautiful stained glass art dating from the period.

The Cathedral is especially known for the presence of numerous sculptures as well as gargoyles, some of which doubly serve as supports for the Cathedral structure or as water spouts. Like most Gothic cathedrals, the Notre Dame de Paris has extensive decorations on its main entrances. Hagia Sophia is one of the most glorious pieces of medieval architecture in Europe.

Situated in modern-day Istanbul, which was once the capital of the grand Byzantine Empire, the Hagia Sophia is iconic in that it reflects the Roman heritage of Byzantine architecture, its Orthodox Eastern taste as well as its Oriental and Christian influences. The building has a huge central dome as well as multiple half-domes on the sides. The interior of the building is propped up using numerous marble columns while the interior is embellished with some of the most iconic Byzantine art, mosaics, and colorful marbles. The original structure of Hagia Sophia, as it stands today, was mostly built during Emperor Justinian’s rule in the 6th century and at the time, was the largest church in the entire Christendom. Most of the Church building is intact today and it is used as a museum in modern-day Istanbul. The Speyer Cathedral in Germany is one of the finest extant examples of medieval Romanesque architecture. The cathedral originally dates back to the 11th century and is an example of excellent Romanesque construction.

The crypt in the cathedral is the largest columned hall crypt made in Romanesque style anywhere in Europe and features beautiful polychrome arches.

The cathedral also features a double-chapel on the southern side of the building. The Speyer Cathedral is considered one of the best examples of medieval architecture in Germany and is one of the largest medieval cathedrals in terms of its proportions. 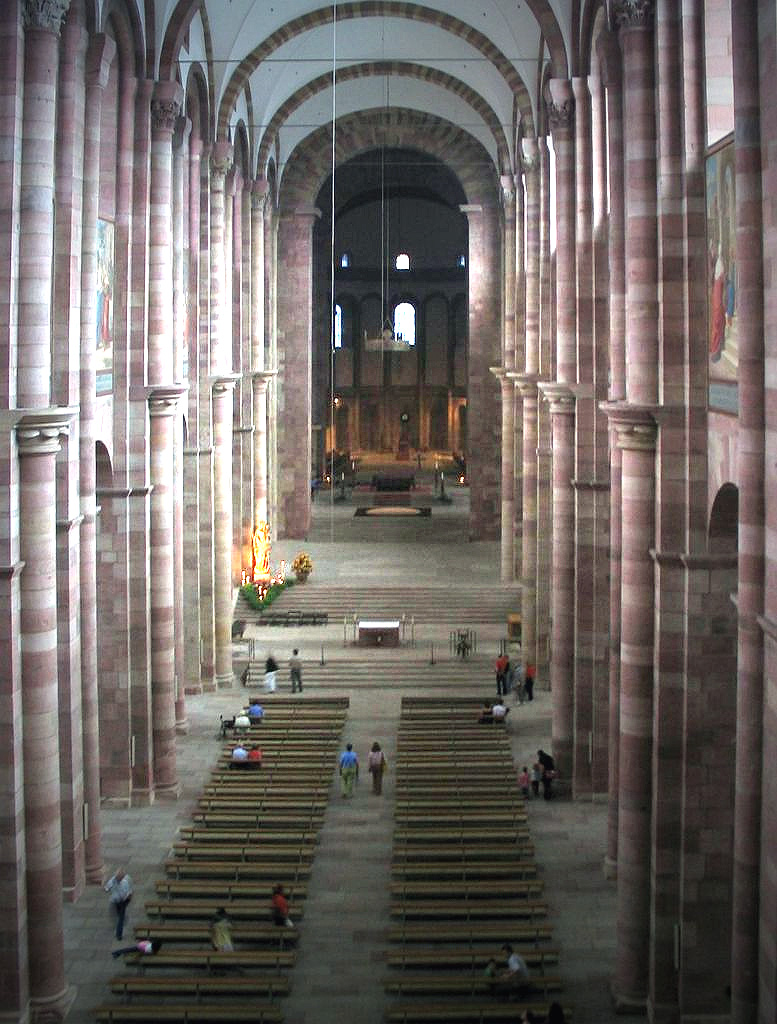 The Republic of Venice in the High and late medieval period was a thriving economic hub with extensive intellectual and artistic activities.

The Palace itself underwent multiple periods of construction, most notably during the 12th century and then in the 13th and 14th centuries. The architecture of the building included a vast courtyard, a large number of chambers for the council members, and multiple apartments for the Doge himself where he granted audience to guests.

Although most of the extant architecture of the Doge’s Palace is in medieval style, portions have been added after the 15th century which reflects Renaissance and post-Renaissance architectural styles.